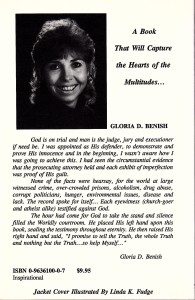 God is on trial for seven crimes against humanity and man is the judge, jury, and executioner, if need be. I was appointed as His defender, to demonstrate and prove His innocence and in the beginning, I wasn’t aware how I was going to achieve this. I had seen the circumstantial evidence that the prosecuting attorney held and each exhibit of imperfection was proof of His guilt.

None of the facts were hearsay, for the world at large witnessed crime, over-crowded prisons, alcoholism, drug abuse, corrupt politicians, hunger, environmental issues, disease and lack. The record spoke for itself… Each eyewitness (church-goer and atheist alike) testified against God.

The hour had come for God to take the stand and silence filled the Worldly courtroom. He placed His left hand upon this book, sealing the testimony throughout eternity. He then raised His right hand and said, “I promise to tell the Truth, the whole Truth and nothing but the Truth…so help Myself…”

All proceedsare donated to Miracle Healing Ministry, a non-profit organization.